Down on Bulldogs
February 15, 1906
Daneville, Virginia
The Times Dispatch
Library of Congress

Down on Bulldogs (Special to The Times-Dispatch)

DANVILLE, VA., February 14 – Dogs was the chief topic of discussion at a lengthy meeting of Common Council of Danville last night. A comprehensive dog ordinance was adopted, which provides for the placing of muzzles on all bulldogs or canines with bulldog blood, that run at large on the streets. The ordinance further provides for a pound, in which to place all dogs that do not have on their necks tags showing that the taxes have been paid. The ordinance, adopted by the Board of Aldermen to place a $25 tax on bulldogs, curs or mongrels was defeated by the Common Council. – The Times Dispatch 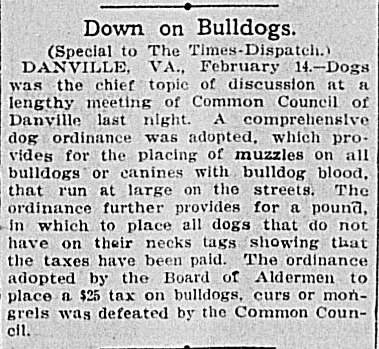 This entry was posted in Historic Breed-Specific Ordinance and tagged 1906, breed-specific, bulldog, ordinance. Bookmark the permalink.